The history of Ume

How Was the Kanji for Ume Formed?

The kanji for Ume is made up of the tree radical and 毎, which means “every”. 毎 is a hieroglyph that represents mothers, who take care of many children in a clan society. The Ume produces fruit on all of its branches, so people started to think of the Ume as a tree that brings good luck.

It is said that this is how the kanji for Ume was formed– the celebration of the flourishing of children.

Ume originated in China. The oldest medical document in China, the Shennong Ben Cao Jing, was written about 2000 years ago, and mentions the Ume. The document outlines 365 types of medicines in three categories according to its effectiveness, and Ume is in the middle category. It says that Ume is good for removing irritation caused by fever, calms the mind, and alleviates any pain in the limbs. The Ume has been known for a very long time.

Ume Came to Japan in the Form of Chinese Medicine, “Ubai”

It is said that Ume came to Japan from China about 1500 years ago, in the form of medicine, Ubai, which was dried or smoked unripe Ume. Ubai was as black as a crow, so it was called “Ubai” (which means bird Ume). It is still used in Chinese medicine.

An Ume Branch for Your Hair– Man’yōshū

“When the Spring comes, let’s take an Ume branch for your hair, and have a merry drink.”

The Man’yōshū is the oldest collection of Japanese poems still in existence. The poems were collected from the latter half of the seventh century to the latter half of the eighth century. There are more than 4500 poems, written by people from various social status, including emperors, noble families, low-ranking government officials, and soldiers. There are 118 poems written about the Ume, and the number of poems is only second to poems about Japanese clovers. The people loved the Ume so much, that it was the first thing that came to mind when they thought of flowers.

“When the Spring comes, let’s take a Ume branch for your hair, and have a merry drink.”

The Ume already appears as Umeboshi in the food section of Japan’s oldest surviving medical document, the Ishinpō, which was completed by Tamba Yasuyori during the Heian Period. It says that the Umeboshi is sour, flat, and not poisonous. It removes irritation, calms the heart, alleviates pain and numbing of the limbs, and is used to treat poor skin and atrophy. It also stops diarrhea and prevents the mouth from drying.

We can tell that people used Umeboshi for its medicinal effects.

Furthermore, the Ume is recorded in Wakan Sansai Zue, an encyclopedia published in the Edo period. The Ume was already known for its health benefits and was used as medicine.

To the Bush Warbler on the Branch of the Ume Tree

During the Heian Period, the Ume tree in the Imperial Palace wilted, so people started to look for a replacement. People found out that the Ume tree in the mansion of the daughter of poet Ki no Tsurayuki was a good tree, and transferred it to the palace.

The daughter was sad to part from the tree, and wrote a poem that meant, “I will present this tree as this is the command of the Emperor. However, how will I answer the bush warbler who comes to perch on its branches every year, when it asks me what happened to the tree?”
Emperor Murakami felt sorry for the daughter, and gave orders to give the Ume tree back to her.

The Ume in this anecdote is called “Oshukubai” (bush warbler, lodging, Ume.)

In Japanese, people who give lavishly are called “Oban burumai”. The reason for this is related to Ume. An important custom of the Kamakura Period was for powerful vassal families to provide a banquet for shoguns for a few days, starting on the first day of the year. This ritual was called “Obanburu”. The banquet food was dried abalone, jellyfish, and Umeboshi with salt and vinegar, which were presented on a special tray. This ritual became the origin of the phrase, “Oban burumai”.

They Fought Wars with the Power of Umeboshi

During the Muromachi Period, the Umeboshi was used among samurai to increase their appetite. The Umeboshi was still only considered medicine during the Sengoku Period. During this time, Umeboshi was eaten by samurai as part of field ration. The Umeboshi was chosen because it didn’t easily spoil, was easy to make, and was packed with nutritional goodness despite its small size, which made it convenient for the samurai. It is said that this is how Ume trees spread throughout the country, and now, there are many famous spots for Ume trees all over the country.

Ume, Hideyoshi, and Sen no Rikyū

One spring, Toyotomi Hideyoshi placed a Ume branch next to a huge pot containing water, and told Sen no Rikyū to put the Ume inside the pot. The servants watched nervously from the side because it was a difficult problem, but Sen no Rikyū calmly took the Ume blossoms and buds from the branch and placed them into the pot. Hideyoshi became very happy when he saw the Ume blossom floating on the water surface. That’s something only Sen no Rikyū can do!

There was a beautiful Ume tree in the Sunpu Castle, where Tokugawa Ieyasu spent the final years of his life. It was a very unique tree in that its seeds would split in half when hit, so it became known as the Miwari-Ume. It was customary back then to make Umeboshi from Miwari-Ume in the Sunpu Castle and bring it to the Nikkō Tōshō-gū Shrine. It is said that this tree was planted by Tokugawa Ieyasu himself. The tree was transferred from the Sunpu Castle to the grounds of the Nikkō Tōshō-gū Shrine under the karamon gates.

Respiratory disease became a serious problem in silver mines during the Edo Period, so they tried using masks that contained the flesh of Ume, and it was a huge success. The masks were made by inserting pieces of the flesh into metal frames, and covering it with thin silk. This “Fukumen” mask was able to prevent the dust from entering because of the acid from the Ume, and it also kept the mouth moist. It is said that this “Fukumen” mask was very beneficial to the workers of the world heritage Iwami Ginzan Silver Mine.

A lot of Umeboshi was packed into wooden barrels and delivered to Edo from Kishu by boat.

The Start of Ume Harvest in Minabe

During the Edo Period, the feudal lords saw the fields of Minabe, where rice harvest was poor. By planting strong Ume trees along the slopes of the mountains where rice couldn’t grow, they tried to decrease land tax and increase agriculture. This is how the harvest of Yabu Ume started.

The Yabu Ume was small and had little flesh, so the local people spent many years trying to improve the fruits by studying different types of Ume and soil. As a result, we now have big, plump Ume like the Nanko-Ume.

At the end of the Edo Period, there was a massive epidemic as more visitors came from overseas. In around 1800 there were two cholera epidemics. The Ume had a crucial role to play, even during this period.

It wasn’t known that the cholera bacteria could be destroyed with organic acid, but people knew from experience that Umeboshi had a strong sterilizing effect, and used it as treatment. The Ume also had a crucial role during the cholera outbreak in 1875 (Meiji 8). The Umeboshi is even stronger than cholera.

Ume and the Manuals of Home Medicine

“Akahon” is a series of manuals of home medicine, which was first published in 1925 (Taisho 14) and continue to be published today. It’s a bestseller with more than 10 million copies published in total. The benefits of Ume extract is recorded in this manual. While many health recommendations are innovated and forgotten, the Ume continues to be used as a health food.

In 1902 (Meiji 35), in Minabe Village (present Minabe), Wakayama Prefecture (Kishu), Sadagusu Takada realized that among the Ume plants which he cultivated by buying seedlings, there was an Ume tree that produced more fruit, that were bigger and plumper than the rest. He nurtured this tree with great care, as the mother tree that would produce Ume which would eventually come to be called Takada-Ume. A branch of the mother tree was given to Teiichi Koyama, who continued Takada’s work.

In 1950 (Showa 25), a quest for the best Ume began by the study of tens of different Ume types, and as the result of five years of research, the Takada-Ume was chosen as the best Ume that was best adapted to the region’s climate. The teachers and students of Minabe High School worked very hard to complete this research.

The name Nanko-Ume was taken from Minabe High School, because its teachers and students supported the selection process, and Takada-Ume, the original name of the Ume.

In 1965 (Showa 40) the Nanko-Ume’s name was officially registered. The Nanko-Ume is now famous as the best Ume in Japan. 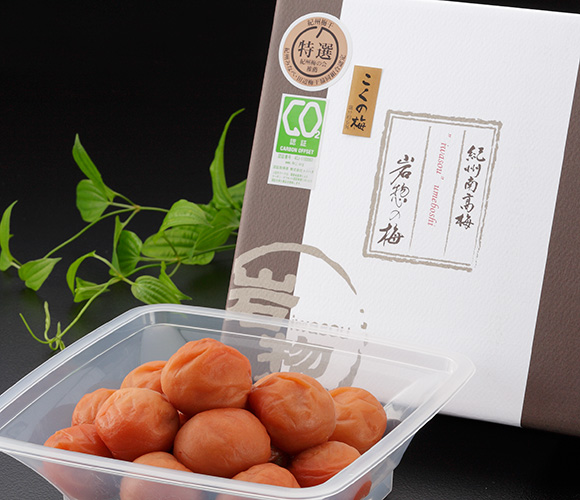 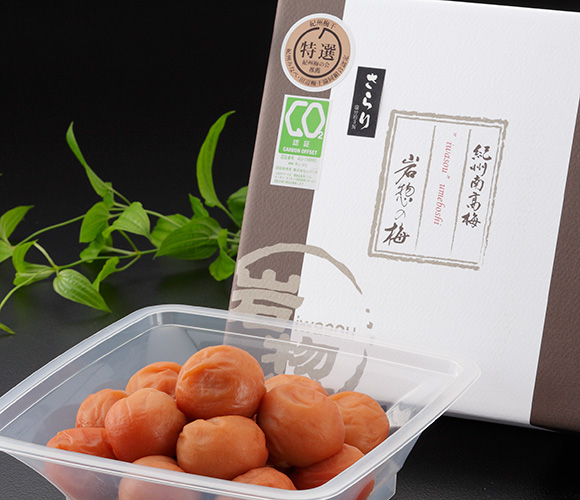 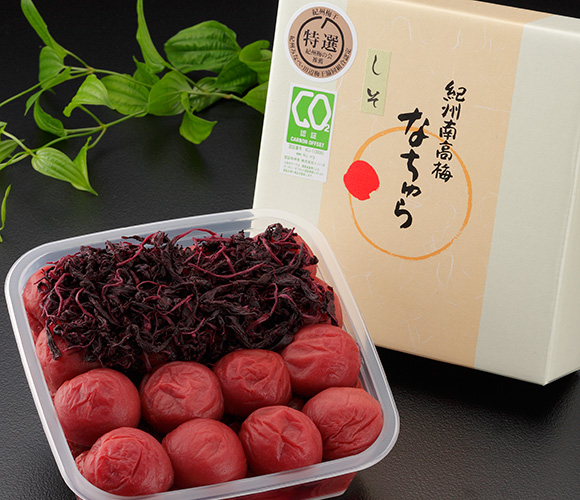 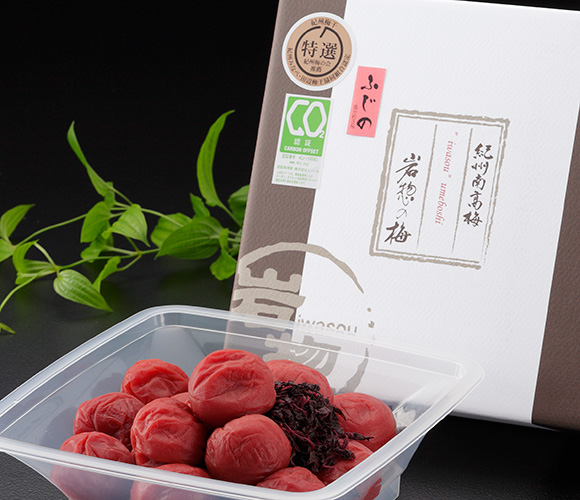